Change will happen if you make it possible. There have been many ideas about believing in change, but only a small percentage of individuals tend to apply the thought. Among one of the few, is Mr. R.K. Dhungana. He believes that change is unavoidable; nonetheless, it is up to you to adapt and evolve. Born into a modest Makwanpur low-class household, R.K. Dhungana is the second child of Kali Prasad Dhungana and Parbati Dhungana.

Like the Nepali saying goes, “plant that prospers have smooth leaves”, R.K. Dhungana was always a dedicated, pragmatic student who excelled in his studies. He completed his study up to 5th grade from Himalaya school. He completed his further education at Bajrabarahi school where he was granted a full scholarship as well as NPR 20,00 from the municipality as part of the scholarship. During his schooling, he became active in social work and politics as a result of his political awareness and curiosity. In class 8, he was elected chairperson of the Junior Red Cross Circle, and in class 9, he was elected secretary of the student organization’s preliminary committee. He went to the adjacent villages like Markhu, Chitlang, Palung, and Kulekhani with the district president to expand and train the organization when he was in 10th grade.

During the second Jana Andolan II, he went to Dhading, where he had been resettled, and walked to the streets in force for 19 days. Higher education was made feasible by his own wages, challenges, and initiatives, despite the fact that there was no base for post-SLC courses due to budgetary constraints. Higher Secondary Education was insured at Machhindra UM in Khanikhola, Dhading District. He was active in social activities for two years in 2064 BS under the duty of establishing and founding president of Navin Adarsh Yuva Samaj, which included the youth of Nawise and Dharke.

His politics, which began with his school education when he was studying and teaching, took on a new shape. He became the coordinator of the Machidra Umawi Anerasvaviyu’s Preliminary Committee when he was in the 11th grade, and while growing the organization and implementing several other initiatives, he felt compelled to join forces with communists. On April 7, 2008, he gave his first public address on behalf of the entrants at the Dhading Dharke Chalise electoral rally. In 2065, he was elected to the district committee of the Maoists’ teachers’ organization, the All Nepal Teachers Association.

As soon as the Nepal Nagarik Party was formally founded on January 20, 2008, he became a key member. He was overwhelmingly elected as the party’s central office-bearer general secretary after the Nepal Citizens’ Party announced that it should go to the public with fresh ideas. Unable to dissociate himself from politics and social campaigns, he became involved in civic movement around 2070 BS to promote good government by including the youth. He has been the headmaster of Pragatikiran Secondary School in Kavre for about two years since 2071 BS, while also being interested in education, politics, social work, and campaigning.

He completed his first-class postgraduate studies in the Faculty of Education at Tribhuvan University’s Sanothimi Campus while he was the headmaster. In addition to his master’s degree in education, he studied undergraduate and postgraduate courses in sociology, politics, law, and sociology, as well as many national and international issues within those fields. He taught Plus Two Education at The Chandbagh School, Bansbari, Kathmandu, from 2073 to 2076 BC. He has been active in leadership roles in various educational and social institutions for almost 14 years.

He is actively participating in the essential effort of developing, exploring, and researching the meaningful and problem-solving social networking alternative platform AP throughout the globe through the Alternative Foundation. In addition, as the founder and chief executive officer of Personal Mastery Nepal, an organization dedicated to the development of positive thinking and life transformation among the general public, he has given motivational seminars and lectures.

He has been active in leadership roles in various educational and social institutions for almost 14 years. His story teaches us that change is possible. The very first step which you must do is to acknowledge that change is needed in order to be opened to possibilities that may appear. In addition, being receptive towards the idea of change will help you manage the anxiety or worry from unexpected events. It takes patience, patience, and patience but once you are ready for change it will come for sure. 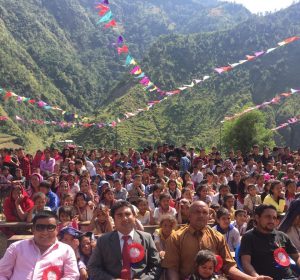